HIC is a non-hierarchical, open and transparent network

Transparency is a key value for HIC that translates into Annual Reports describing the Coalition’s activities and the use of financial resources; regularly scheduled elections for the Presidency and Board regional representatives for which only HIC Members are eligible; and documents approved by the General Assembly (such as the Constitution and Bylaws) that regulate the functioning of the Coalition.

In this section we include all information relevant to HIC’s principles of transparency.

“HIC acts as an international collective of civil society organizations, social movements and individuals that mobilizes and advocates in defence, promotion and enforceability of the human rights of homeless, evicted, displaced, landless and inadequately housed people and communities, including those under occupation, in urban and rural areas.”

“HIC Members contribute with actions that allow the strengthening of HIC and the implementation of HIC’s strategy. These contributions are divided into 5 groups (i) research and documentation, (ii) training, (iii) networking, (iv) fundraising, funds management and other services (logistics, administration and legal), and (v) dues calculated according to the annual budget of the member organisation” 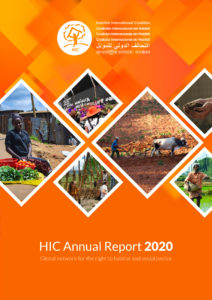 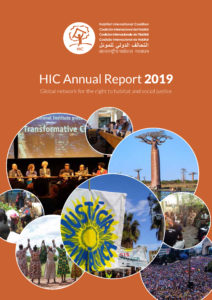