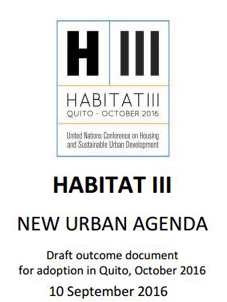 After the release of the Surabaya Draft of the New Urban Agenda at the third session of the Preparatory Committee for the Habitat III Conference in Surabaya, Indonesia in July 2016, the New Urban Agenda has finally been agreed on at the Habitat III Informal Intergovernmental Meeting which took place at
the United Nations Headquarters in New York from 7 to 10 September 2016, and it
will be adopted in Quito, Ecuador, in October 2016.