Passerelle Publication: Unveiling the Right to the City 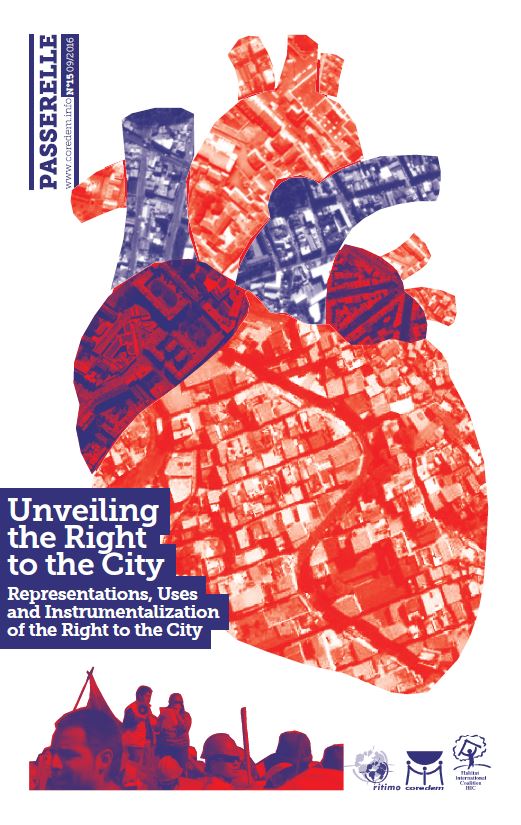 The right to the city concept has seen a large number of
setbacks, back and forths, interpretations and
has been given different meanings. Many different agents have claimed the right to
the city, from Nanterre University back in the 60’s to the favelas of Rio, the German self-governed groups or even the UN-Habitat.

It is surely of interest to liven up the debate on a concept. Nothing is more pointless than having some principles stated in a book with no practical application of them. Naturally, very often the implementation stage generates disagreements. It is useless for some social movements and inevitable for some others, while some people do not use the term but concretely apply its components. Some, however, use the concept in order to alter the emancipatory potential Henri Lefebvre had thought out.

This publication is a result of all of these questions, thanks to all the author’s contributions.

The organisation Ritimo is in charge of Coredem and of publishing the Passerelle Collection. Ritimo is a network for information and documentation on international solidarity and sustainable development. In 90 locations throughout France, Ritimo opens public information centres on global issues, organises civil society campaigns and develops awareness-raising and training sessions. Ritimo is actively involved in the production and dissemination of plural and critical information, by means of its website: www.ritimo.org

Habitat International Coalition (HIC is the global network for rights related to habitat. Through solidarity, networking and support for social movements and organizations, HIC struggles for social justice, gender equality, and environmental sustainability, and works in the defence, promotion and realization of human rights related to housing and land in both
rural and urban areas.

The Passerelle Collection is published by Ritimo with the support of the Charles Léopold Mayer Foundation for the Progress of Humankind in the framework of the Coredem initiative.

Charlotte Mathivet, the editor and coordinator, is a political scientist, specialized in housing and city issues. She has been working at HIC General Secretariat and she is part of Droit à la (Belle) Ville, a HIC Member. She also edited number 7 of the Passerelle Collection, Housing in Europe: Time to Evict the Crisis, and number 10, Take Back the Land, The Social Function of Land, Housing, Resistances and Alternatives

This publication was presented and distributed at HIC General Assembly, GPR2C booth at Habitat III and GPR2C activities, during Habitat III.