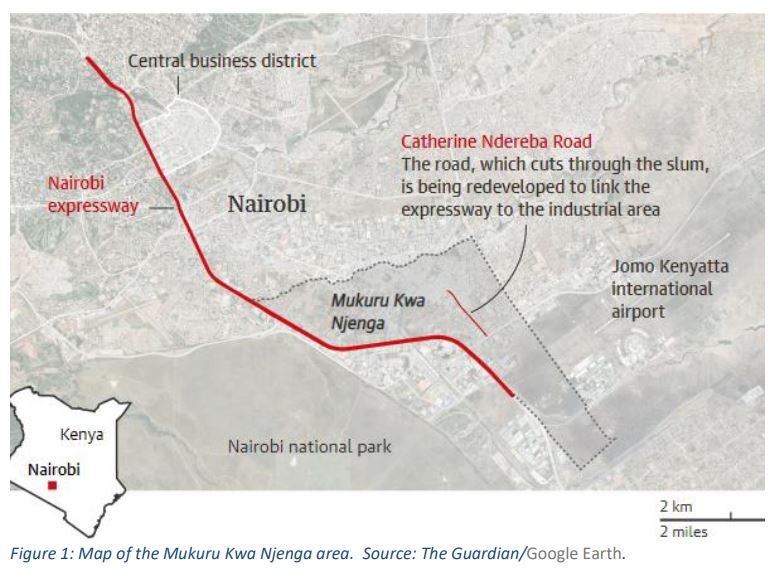 On Saturday, 13 November 2021, at 7:13pm (EAT), hundreds of families from Mukuru Kwa Njenga slums in Nairobi were left homeless by violent eviction and demolition of their community. It is emerging that the demolitions went beyond the intended marked territory that was initially to be on Catherine Ndereba Road, which had been encroached on by the public. The first round of demolitions in Mukuru Kwa Njenga, publicly announced on 8 October, started only three days later. Heavy road-building machinery, some bearing government logos and flanked by Kenyan police, flattened the homes and businesses along a 30-metre-wide strip of Catherine Ndereba Road.

Tthe road connects Mukuru to the industrial area to the north, the airport to the east and the route of the new expressway to the west. Inhabitants report that, in November, The local authority – Nairobi Metropolitan Services arrived without warning and razed buildings on a large area of adjacent private land where people had their homes. Orbit Chemical Industries, and private firm, apparently owns the land, which had been the subject of several complex court disputes.

The land in question is in the area earmarked for public road construction. The primary targetsfor evictions are those who settled informally. The government attributes this encroachment to overpopulation and uncontrolled land settlement. According to some residents, some community members settled at the site prior to the road-planning process, enabling them to settle where they currently reside, at a prescribed distance from Catherine Ndereba Road.

Mukuru Kwa Njenga slums, as any other slum in Nairobi City County, has been faced by numerous challenges, like informal human settlements everywhere. However, but the Mukuru inhabitants have been able to make continuous physical improvements to their community. Whole families live—or, at least, survive—in tiny one-room corrugated iron shacks with very few basic utilities.

Residents have lived at Mukuru Kwa Njenga slums for more than 30 years, having occupied and built permanent structures on the land at the height of the country’s urban slum-upgrading program. Some residents insist that they already had regularized their occupancy with the Ministry of Lands and Housing, and pay taxes.

Despite the state’s human rights treaty obligations relating to housing and eviction, tthe government has not offered compensation or alternative location for resettlement.

Forced evictions in Kenya have primarily targeted marginalized people who have lived for years without access to secure land and housing tenure, and without adequate amenities such as clean water, sanitation, health services or education. People lost clothing and other personal belongings, and dozens of families are now sleeping in makeshift tents amid the rubble and the open sewage now overflowing during the seasonal rains. Left with no way of making money, some have not eaten in days. At least one person has died in a partially demolished building, amid reports of children being injured in the process.

Please help us call for responsible Kenyan authorities to ensure remedy and reparations the victims of this gross violation committed against them.

You can do so by supporting this case with your letter urging right action by the duty holders.

Simply go to this HIC-HLRN Urgent Action case and click on “Support.” And read the complete case description here.

Tags:
Niños-as / Desalojos forzosos / Gentrificación / Acciones urgentes
We use cookies on our website to give you the most relevant experience by remembering your preferences and repeat visits. By clicking “Accept All”, you consent to the use of ALL the cookies. However, you may visit "Cookie Settings" to provide a controlled consent.
Accept AllCookie Settings
Manage consent