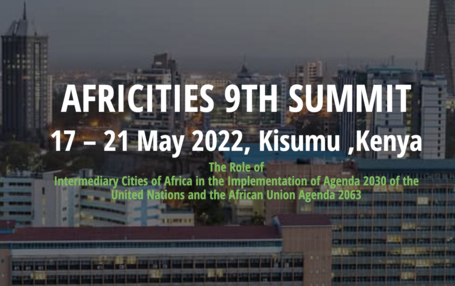 Africities is the United Cities and Local Governments of Africa’s flagship pan-African event that is held every three years in one of the five regions of Africa.

They mobilize communities and local authorities in African countries, as well as financial institutions, civil society groups and development partners at continental and international level.

For the first time ever, an intermediary city, Kisumu City – Kenya, will host the 9th Edition of Africities Summit, from the 17th to the 21st of May 2022.

The Role of Intermediary Cities of Africa in the implementation of Agenda 2030 of the United Nations and the African Union Agenda 2063’.

Africities is the materialization of a choice and of a will. The aim is to strengthen the role of local and regional governments in the development of the continent and to help build the integration and unity of Africa from its territories. Africities summit is the largest democratic gathering organized in Africa. It is the main platform for dialogue on decentralization and local governance that brings together every three years, African ministers; mayors, leaders and elected officials of local and regional governments; civil society organizations; traditional authorities; representatives of the African diaspora; economic actors ; experts, researchers and academics; financial institutions; and development partners.

Early Bird has been extended to 30th April