The Women and Habitat Africa Working Group (WHAWG) is inviting HIC Africa members working on women and habitat related issues to join the working group. WHAWG is a network and co-learning space for HIC Africa members working on the advancement of gender equality in habitat and aims to consolidate their initiatives to offer a collective voice for intensified advocacy. 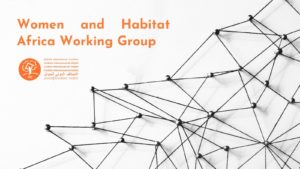 For over a decade, 1988 -1999, the HIC Women and Shelter Network was one of HIC’s most prominent activities. During that time, it had major successes internationally. It established the rights of grassroots women’s groups to influence habitat policies.

HIC-WAS also entrenched women’s equal rights to own and inherit land and housing through the Beijing Platform for Action 1995 and in the Habitat Agenda 1996.

HIC’s failure to keep the Women and Shelter Network going in the 21st Century led to renewed calls for it to be revived, including in the most recent Evaluation.

This group has now been revived and is now operational. The Note Verbale (available in French too) was presented at the HIC General Assembly of 2021, and here is the Working document attached to this message.

Among other tasks, the group will engage in peer learning, policy analysis, social media advocacy, advocacy before the United Nations and the African Union, including consultation and negotiations with local authorities and other civil society organisations.

HIC members in Africa are now called upon to join the working group and leverage on the two HIC’s great strengths: learning and advocacy, to advance the gender equality agenda in land and housing.

Interested members should send their names and organization to Hilary Zhou: Email: hilaryzhou@gmail.com and Samuel Ikua: samuelikua@gmail.com, to express interest in joining the group.