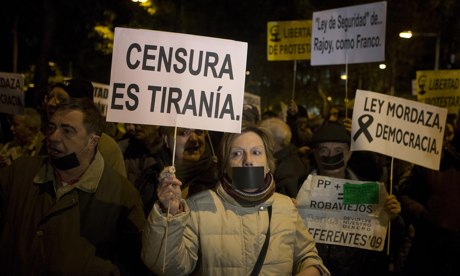 Spain has approved draft legislation for fines of up
to €30,000 (£25,000) for offences such as burning the national flag, insulting
the state or causing serious disturbances outside parliament.

Opposition parties, judicial
and social groups have heavily criticised the bill as an attempt by the conservative government to
muzzle protests against its handling of the severe economic crisis.

The measures, presented by the
interior minister Jorge Fernández Díaz to update a 1992 law, also include fines
of up to €1,000 for insulting or threatening police officers during
demonstrations. Similar fines are planned for disseminating photographs of police
officers that endanger them or police operations.

Spanish cities have
experienced weekly protests, the vast majority of them peaceful, since the
start of the crisis in 2008.

The conservative Popular party
took office with Mariano Rajoy as prime minister in 2011 and issued a series of austerity measures and cutbacks in health and education
and labour and financial reforms in an effort to refloat the economy and stave
off a bailout.

The measures triggered an
increase in street protests, including several attempts to encircle parliament,
some of which ended in clashes with police and rubbish containers being set on
fire.

“When more than 20% of
people are unemployed, I don’t think this legislation is what we require,”
said Alejandro Touriño, partner and information specialist at the law firm
Ecija.

The draft legislation for the
most part does not define new infractions or offences, but lays down guidelines
for fines that judges will be able to impose. Until now, it was up to a judge
to decide the level of a fine.

It does, however, include four
new offences, which are classified as very serious and could carry fines of up
to €600,000. They are: demonstrations that interfere in electoral processes;
unauthorised or prohibited protests at strategic installations such as airports
or nuclear plants; and aiming blinding lights – such as laser beams – at public
transportation. Any person who commits three lesser offences within two years
will also be in line for a maximum fine.

The bill must be approved by
parliament, but its passage is virtually guaranteed as the ruling party has an
absolute majority in both chambers.

* To read this news in the original source, click here.