Land, housing, city – Our rights are not commodities! 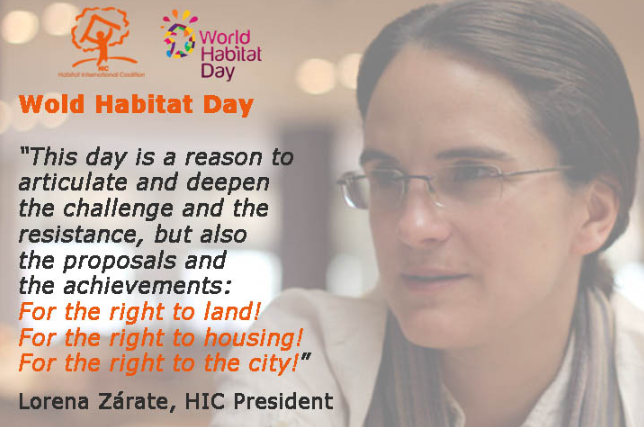 The commemoration of World Habitat Day is for HIC and its allies an outstanding occasion to launch an energetic call to attention addressed to authorities, institutions, media and the population in general. We are outraged by the growing inequality faced by our societies in all corners of the planet and its cruel reflection in the spaces and territories in which we live, both in the countryside and in the city. We unite our voices to denounce the processes of impoverishment, exploitation, dispossession and displacement suffered by thousands of families and communities. We make visible the violations of the rights to land, housing, the city and the habitat of ever larger groups of the population, often committed in the name of “development” and “improvement of the quality of life”. For us, commemorating World Habitat Day is an urgent response to the 100 million homeless girls, boys, youth, women and men and the more than 1 billion people without adequate housing and habitat, while public services and commons are privatized and the number of empty houses is growing everywhere.

It is at the same time a relevant opportunity to show the strength of our initiatives and joint actions around critical and urgent issues. Among them, we would like to highlight:

This day is a reason to articulate and deepen both protest and resistance, but also proposals and achievements. It is time to launch a collective cry, both local and global, in defense of human dignity, social justice, equity, diversity, solidarity and peace. A time to mobilize against the alarming increase of misogyny, racism, discrimination, xenophobia and authoritarian discourses and practices in so many parts of the world.

As every year, starting today and throughout the month, HIC members will be involved in multiple initiatives in countries such as India, Palestine, Costa Rica, Bolivia, Mexico, England, the United States and Cameroon, among many others. In the coming weeks, there will be online activities, including exchanges on human rights observatories and the right to the city. And at the end of October, we will join many other organizations and networks, such as the Global Platform for the Right to the City, to promote and participate in the International Meeting for Equal Cities that will take place in Buenos Aires, Argentina, within the framework of Urban 20 (meeting of mayors of cities in G20 countries). Stay tuned and participate!

This World Day for Human Rights linked to Habitat is of course an opportunity to look ahead, learning from the path travelled. For this reason, two years after the Habitat III conference, and as part of the celebration of its 40th anniversary, HIC launches a historic publication. This compendium gathers testimonies and analyses of four decades of work and struggle for the right of every person to a safe place to live in peace and dignity. The fruit of collective effort, it is undoubtedly a fundamental contribution to the institutional memory of our network and its allies, and an irreplaceable legacy for the reflection and action of generations to come. We count on you to move forward.

Tags:
Colectivización / Desalojos forzosos / Género / Gentrificación / Crisis de vivienda / Derecho a la Vivienda / Derechos humanos / Derecho a la tierra / Derecho a la ciudad / Comunicación y difusión / Publicación / Campañas de solidaridad
We use cookies on our website to give you the most relevant experience by remembering your preferences and repeat visits. By clicking “Accept All”, you consent to the use of ALL the cookies. However, you may visit "Cookie Settings" to provide a controlled consent.
Accept AllCookie Settings
Manage consent