By: Geneva Support Group for the Protection and Promotion of Human Rights in Western Sahara 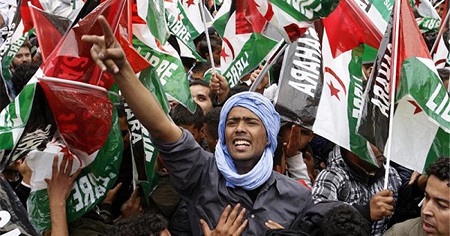 In a joint communication addressed to the Moroccan government, four human rights Special Procedures of the Human Rights Council express serious concerns about a multitude of abuses committed against eight prominent Sahrawi human rights defenders and describe a hostile environment toward human rights work in the occupied Western Sahara.

While the UN communication specifically addresses violations committed against the eight victims, it also mentions the wider concern that these cases represent the tip of the iceberg and that Morocco is carrying out widespread systematic intimidation against Sahrawi human rights defenders in order to discourage them from carrying out their work and to limit their right to freedom of association and expression.

Recently, Morocco has also weaponized Covid-19, improperly using health restrictions in various ways against Sahrawis. The victims cited by the UN, all human rights defenders, include citizen journalists, well-known advocates and student activists, and among them are two political prisoners.

All of the cases relate to incidents of persecution of Saharawi activists by Moroccan authorities in response to their support for the right to self-determination for the people of Western Sahara, a Non Self-Governing Territory pending decolonization that has been occupied by the Kingdom of Morocco since 1975.

The UN urges Kingdom of Morocco to provide information concerning the current situation of the eight victims and to explain what measures are being taken to ensure that human rights defenders in Morocco and Western Sahara can safely undertake their legitimate activities in an adequate environment free of threats, harassment, stigmatization or criminalization of any sort.

The communication also asks the Kingdom of Morocco about specific steps being taken to investigate the violations and to hold those responsible accountable for their actions.

When expressing their serious concerns, the Special Procedures placed the Polisario Front, recognized since 1979 by the UN[2] as the sole representative of the people of Western Sahara, in copy to the letter sent to the Kingdom of Morocco. This is the first time the Polisario Front has been placed in copy to a letter sent to the Kingdom of Morocco, attesting to the position of the UN Human rights mechanism in line with international law. Moroccan authorities angrily responded[3] to the UN communication but failed to address any of the allegations and lashed out at the UN human rights experts for copying the Polisario Front, complaining that by doing so the UN Human Rights Mechanisms had taken a political position.

The Saharawi journalist and human rights defender Naziha El Khalidi of the award-winning Sahrawi media collective Equipe Media received death threats purporting to be from the Moroccan intelligence services after she published an article online in October 2020 addressing Morocco`s repression against Sahrawi activists. In November 2020, Moroccan forces severely disrupted her wedding, placing both her house and the house of her fiancé, Ahmed Ettanji, under siege for several days. The Kingdom of Morocco used Covid-19 as a weapon against her, using its preventative health measures as an excuse. The UN communication asks the Kingdom of Morocco to specify what steps are being taken to protect Naziha El Khalidi against the threats of death she has received.

Aminatou Haidar, a prominent Saharawi human rights defender and Right Livelihood Award Laureate 2019 has been subjected to surveillance, harassment and intimidation since the establishment of the new human rights organization she presides over, “ISACOM”, which works against the Moroccan occupation of Western Sahara. In September of 2020, the King`s prosecutor announced an investigation against her and other ISACOM founders for possible violations of Morocco`s territorial integrity.

Haidar`s family was also targeted for surveillance, harassment and intimidation. Moroccan authorities used Covid-19 health measures as a pretext for the presence of police vehicles around Haidar`s home. The UN communication requests Morocco to explain why Aminatou Haidar`s home was under surveillance and the status of the investigation against her by the King`s Prosecutor, as well as its legal basis.

Saharawi human rights defender Mahfouda Bamba Lafgir (Lefkir) was arrested on 15 November 2019 during her cousin`s trial after she admonished the Moroccan judge for hurling verbal abuse at her cousin`s mother. At the time of her arrest, police broke into her phone and have been threatened ever since that her personal information and photos would be posted online. She was arraigned without prior notice, nor access to a defence lawyer. During her trial on charges of obstruction of justice and insulting a judge, she was convicted and sentenced to six months in prison. Since her release in May of 2020 she has been under surveillance and her unemployment benefits have been cut off; she has also been threatened with arrest if she continues with her activism.

The UN communication requests the Kingdom of Morocco to provide the legal basis for Mahfouda Bamba Lafgir`s arrest, what measures were taken to preserve her human rights during detention and interrogation, as well as an explanation as to why her unemployment benefits have been cut off.

Saharawi human rights defender Yahya Mohamed Elhafed Iaazza, a member of the Sahrawi human rights organization CODESA, has remained under detention for over 13 years following his arrest in 2008 and subsequent torture and enforced disappearance before his trial. He was tried and convicted for participating in a demonstration that he never attended. For over a decade Yahya has suffered horrific abuse at the hands of Moroccan prison officials, including numerous methods of torture, the deprivation of food and water and being subjected to numerous other inhumane treatments and conditions.

Most recently, from 13 October to 9 December of 2020, Yahya Mohamed was again “disappeared” by prison authorities after being exposed in his cell to a prisoner infected with COVID-19. When he was finally allowed to call his daughter he sounded gravely ill; according to the communication by the UN Special Procedures, Moroccan prison authorities continue to refuse to clarify his health status. The UN communication asks Morocco to provide information about the current health situation of Yahya Mohamed, on whether his torture was investigated and if those responsible were brought to justice, as well as details on his disappearance from October to December of 2020.

Saharawi student activist and human rights defender Al-Hussein Al-Bashir Ibrahim was sentenced in November 2019 to 12 years in prison; in September 2020 a Moroccan Appeals court ratified the sentence. The reason for the arrest and imprisonment of Al-Hussein is his student activism; his case was closely linked to the case of the “Student Group” whose detention was found to be arbitrary in a 2019 decision rendered by the UN Working Group on Arbitrary Detention.[4] The prosecution`s case was based on confessions extracted under torture from the students and the police interrogation of Al-Hussein, which he refused to sign. The UN communication asks Morocco to legally justify Yahya Mohamed`s arrest and whether it conforms to international human rights norms and standards.

Saharawi journalist Mohamed Radi Ellili, who left Western Sahara in 2016 after being persecuted and retaliated against by Morocco for his reports on Western Sahara and subsequently obtained political asylum, was subjected to a defamation and intimidation campaign for his continued criticisms human rights violations and repression of freedom of expression by the Kingdom of Morocco. His family was also threatened online, and Moroccan authorities refused to issue passports to his wife and children to join him in exile unless they requested a royal pardon. The UN communication requests from Morocco an explanation of why Mohamed Radi`s children have not received their passports.

Saharawi human rights defenders Ali Saadouni and Nour Eddin El Aargoubi were abducted from the streets of the city of El Aaiún by Moroccan police in November 2020, taken to a remote location outside the city, threatened with rape, death and imprisonment, and subjected to torture and abuse in response to their activism and advocacy in favour of the right to self-determination. The activists are well known for criticizing the UN peacekeeping mission in Western Sahara, known as MINURSO, because of the lack of a human rights component, to which the Kingdom of Morocco is strongly opposed. The UN communication asks the Kingdom of Morocco to provide information about what measures are in place to guarantee the physical security and psychological integrity of Ali Saadouni and Nour Edin El Aargoubi, and to explain what investigations are underway regarding their allegations of being abducted and tortured by agents.

A part of Western Sahara has been under occupation by the Kingdom of Morocco since it invaded the territory in 1975 and subsequently illegally annexed it. To this day, the situation in the Territory remains a humanitarian crisis with systematic, gross human rights violations and breaches of international humanitarian law being committed as direct consequence of the prolonged illegal military occupation. The Kingdom of Morocco has, as the Occupying Power, the de facto control, both over most of the territory and over the Saharawi people living on the occupied land, who are deprived of their civil, political, economic, social and cultural rights.

Since the Kingdom of Morocco violated the 1991 UN-sponsored ceasefire with the Polisario Front this past 13 November, both parties have returned to armed conflict, which is mostly taking place along the 2700-long separation wall built by the Occupying Power, that has since severely cracked down on Sahrawis under occupation. Some of the violations described in the UN communication were carried out during this period.

Today there is an alarming culture of impunity among Moroccan occupying authorities due to the absence of independent international human rights monitoring in the occupied Western Sahara.

Sahrawi human rights defenders, including citizen journalists, are the only ones left to document and inform on the severe humanitarian crisis in a Territory that for many years now is considered as a blackhole.[5]

The Geneva Support Group for the Protection and Promotion of Human Rights in Western Sahara considers that this communication from the UN comes at a critical time for Sahrawi civil society under Moroccan occupation, and invites all Special Procedures to pay particular attention to the human rights violations occurring in the Occupied Western Sahara.

The Geneva Support Group also calls upon the international community to take urgent steps to protect the Sahrawi population and to ensure that the Kingdom of Morocco fully respects the four Geneva Conventions and all international humanitarian law norms.

[3] Letter of the Mission of the Kingdom of Morocco to the Office of the High Commissioner for Human Rights, 27 January 2021(French and English versions in the same document), https://spcommreports.ohchr.org/TMResultsBase/DownLoadFile?gId=35929.