The HIC-Africa region has formed a working group on Women and Habitat. The group will consolidate the activities of HIC Africa members on women’s land and housing rights, and offer a collective voice for intensified advocacy. 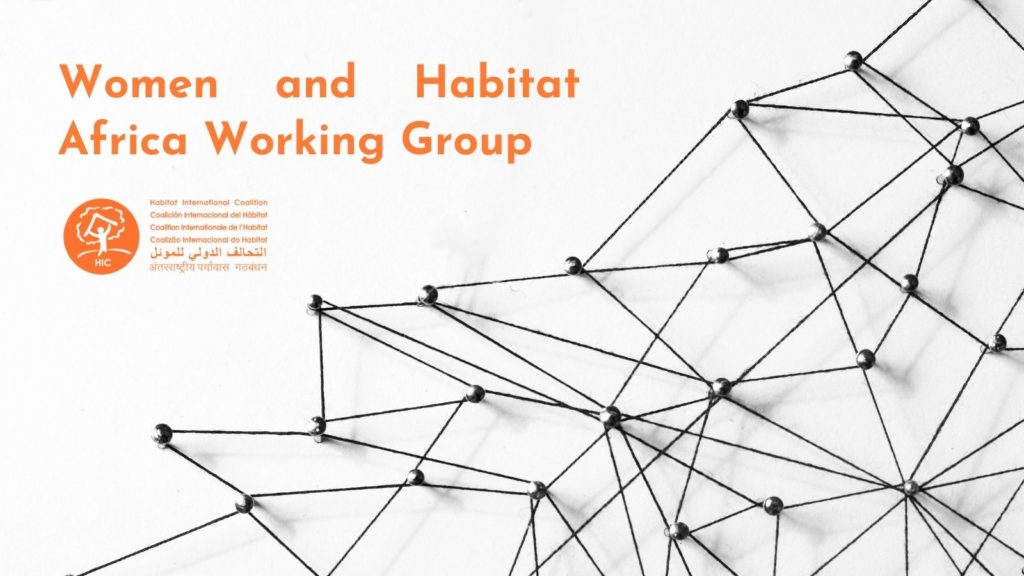 The formation of the group was initiated through the HIC Board, followed by a Note Verbale (available in French too) presented at the HIC General Assembly of 2021. The group has developed a Working Document.

This continues HIC’s commitment to gender equality first advanced through the HIC Women and Shelter Network (HIC-WAS) in the 1980s and 90s. This led to the UN Human Settlements Commission’s resolution 13/13 of May 1991 that “Invites governments and UN Habitat to developer closer cooperation with HIC Women and Shelter Network and similar non-governmental organisations at national, regional and international levels”.

HIC-WAS also influenced entrenchment of women’s equal rights to own and inherit land and housing through the Beijing Platform for Action 1995 and in the Habitat Agenda 1996.

The working group aims to build on earlier efforts of HIC-WAS, but now with focus on Africa.

Among other things, the group will work on the negative customary practices predominant in Africa that lead to women losing their land and housing rights, sometimes coupled with gender based violence.

Other key activities will include advocacy before UN Agencies and the African Union, including consultation and negotiation with local governments and authorities.

The Women and Habitat Africa Working Group is set to renew and build on earlier efforts of HIC-WAS as well as link up with many HIC Africa member organizations’ ongoing projects of HIC-HLRN on Women Land and Housing Rights.

Tags:
Gender / Coordination / Networking
We use cookies on our website to give you the most relevant experience by remembering your preferences and repeat visits. By clicking “Accept All”, you consent to the use of ALL the cookies. However, you may visit "Cookie Settings" to provide a controlled consent.
Accept AllCookie Settings
Manage consent