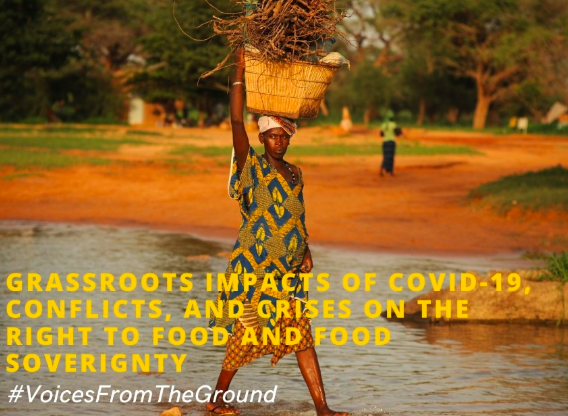 This Declaration is the result of the global popular consultation led by the Civil Society and Indigenous Peoples’ Mechanism (CSIPM) in 2022 on the grassroots impacts of COVID-19, conflicts, and crises on the right to food and food sovereignty.

Sam Ikua from Mazingira Institute  represented HIC in the the Africa consultations in the lead up to the 50th session of the Committee on World Food Security, that took place from 10-13 october.

We, networks of African peasants, fisherfolk, pastoralists, agricultural workers, urban food insecure, consumers, indigenous peoples, women, youth and civil society engaged in the popular consultation launched in April 2022 by the Civil Society and Indigenous Peoples’ Mechanism (CSIPM) of the UN Committee on World Food Security (CFS),  have come together to exchange and discuss the situation and concerns related to food that we are experiencing now in our territories, our countries and our different regions in Africa. We are strongly calling on our governments, our communities, our organisations and all other groups of actors at the different levels of our food systems to mobilise and engage together to truly take charge of the food sovereignty of our continent.

The COVID-19 pandemic and the Ukraine war have added significant new stresses to the fragile global food supply chains, which had already revealed their limits in social, environmental and economic terms.

Africa is a prime victim of existing global inequalities: a subordinated economic power on the world scene, with limited voice in political decision-making directly affecting the continent and its nations and extremely uneven distribution of costs and benefits arising from exploitation of its natural resources. Affected by structural inequalities introduced from the time of colonisation and reinforced by neoliberal policies, African countries suffer today from food import dependency and unsustainable levels of debt which, tied to the complex conditionalities of debt agreements, gravely affect the governments’ abilities to put effective social protection and people-centred development measures in place.

Extractivism and corporate resource grabbing are expanding. Multiple armed conflicts are spurred on by the acceleration of global armaments markets. These conditions amply justify the frustration and the despair of the youth, in many countries and regions, the breeding ground for their engagement in dangerous and illicit routes of survival. Women are particularly affected and their burden is compounded by gender-based violence and inequalities.

This situation has further exposed the urgent need for deep change towards more resilient, sustainable, localized and equitable forms of provisioning healthy and nutritious food based on principles of justice, the right to food, and food sovereignty, which enhance the local know-how and resources in the territories and the different countries.

But powerful geo-political and economic actors are increasingly mobilizing and promoting narratives and initiatives that aim at reinforcing and deepening the reach and dominance of the global industrial food system. These initiatives are seeking to sidestep the only inclusive and participatory global food and agriculture governance and accountability forum in which social movements can make their voice heard and governments can jointly deliberate and be held to account – the UN Committee on World Food Security (CFS) – in favor of a ‘multistakeholder’ model of governance.

Faced with today’s multiple food crises, African governments are increasingly calling for breaking dependency on food imports. However, most of them are implementing, at the same time, an agenda of ‘modernizing’ African agriculture by concentrating investments in specialized export-oriented commodities, based on corporate seeds and technologies that destroy our continent’s  capacities and possibilities  to effectively limit food dependency. The vertical and horizontal incoherence of sectoral policies, particularly in the areas of agriculture and trade (national, regional and international), also constitute severe blockages to protecting and promoting local supply of food and agricultural products to sustainably cover most of the food and nutrition needs of our population and industry. Even where policy frameworks promoting agroecological family farming and territorial food systems have been adopted, with the participation of producer organizations, they are still not being implemented.

Instead, for us, African small-scale food producers and other social constituencies, this is the moment to decisively change the paradigm and the strategic orientations of the continent’s food and agriculture policies in order to achieve Africa’s food sovereignty, based on the continent’s rich natural resources, its peoples, knowledge, practices, the diversity of its cultures and social traditions. Producing what we eat and eating what we produce. Coherence is needed between short-term responses to immediate needs and longer-term transformative action, in a context of global transition and climate change.

Attaining this perspective in public policy requires the engagement of political decision-makers, consumers and our social movements.

We strongly call on African political authorities to:

We call on African governments and civil society, engaging together, to defend the UN CFS and push for it to act as an inclusive multilateral space for developing coherent, globally coordinated

Tags:
Food (rights - sovereignty - crisis)
We use cookies on our website to give you the most relevant experience by remembering your preferences and repeat visits. By clicking “Accept All”, you consent to the use of ALL the cookies. However, you may visit "Cookie Settings" to provide a controlled consent.
Accept AllCookie Settings
Manage consent