This document is a glimpse of what is at stake for many Zimbabweans post-land reform with a view to the consequences of insecure tenure and ambiguous land titles in a policy vacuum. It constitutes a baseline survey as an example of what is entailed in counting the costs of post-resettlement displacements and tenure insecurity in Zimbabwe’s land reform program.

The findings and recommendations of this report will be useful as input into the land-policy consultations and formulation currently underway (June 2021) and a contribution to the indispensable quantification of losses, costs and damage due to gross violations of human rights, including the forced evictions in Zimbabwe’s land reform settlement areas. These research findings will also ground recommendations to be mainstreamed in the country’s National Development Strategy 1 (NDS1), in pursuit of the 2030 Agenda of Sustainable Development Goals (SDGs) and the National Voluntary Review toward meeting their respective targets and indicators. 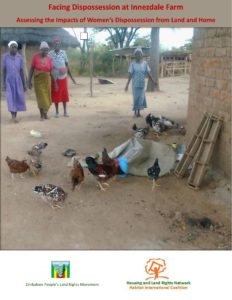 Tags:
Landless / Land rights / Property rights / Norms and standards / Public policies
We use cookies on our website to give you the most relevant experience by remembering your preferences and repeat visits. By clicking “Accept All”, you consent to the use of ALL the cookies. However, you may visit "Cookie Settings" to provide a controlled consent.
Accept AllCookie Settings
Manage consent