Forced Evictions in India in 2018: An Unabating National Crisis 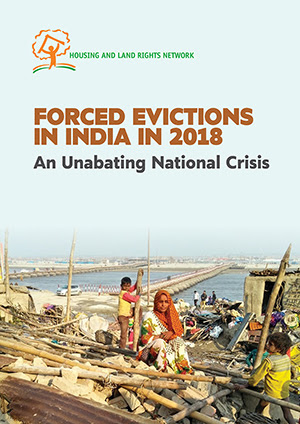 Housing and Land Rights Network India (HLRN) has released a new publication with data on forced evictions collected by HLRN’s National Eviction and Displacement Observatory. Forced Evictions in India in 2018: An Unabating National Crisis reveals that government authorities, in both the central and state spheres, forcefully evicted, at a minimum, 202,233 people across urban and rural India including the demolition of over 41,730 houses.

While these figures are extremely alarming, they only reflect cases known to HLRN. The actual number of people evicted/displaced in 2018, thus, is likely to be much higher. Moreover, HLRN has documented that about 11.3 million people live under the threat of eviction across the country. These ammount to a national eviction and displacement crisis which is deeply connected to gross human rights violations, including the human rights to life, adequate housing, land, work/livelihood, health, food, water, sanitation, education, security of the person and home, information, participation, and freedom of movement and residence.

Under the context of India’s General Elections, it is important to understand the significance of the rights to housing and land, especially for the most marginalized. The report gathers the data collected as well as recommendations for central and state governments.

Housing and Land Rights Network hopes that its new reports will be useful for a wide range of actors, and will contribute toward the improvement of living conditions and the realization of the human right to adequate housing, which is the right of everyone to a safe and secure home and community, in which to live in safety, security, peace, and dignity.

You can access the report here.
Tags:
Homeless / ESC rights / Forced evictions / Housing rights / Land rights / Accompanying social processes / Communication and dissemination
We use cookies on our website to give you the most relevant experience by remembering your preferences and repeat visits. By clicking “Accept All”, you consent to the use of ALL the cookies. However, you may visit "Cookie Settings" to provide a controlled consent.
Accept AllCookie Settings
Manage consent