Report: Forced Evictions in India in 2019: An Unrelenting National Crisis

The report documents forced evictions in India over the last three years, highlights the severe and long-term human rights impacts on affected persons, and makes recommendations to the government to address this serious but silent crisis of forced evictions and demolitions of homes of low-income communities. 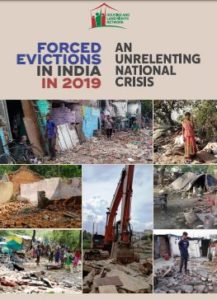 The report is available online at: https://www.hlrn.org.in/documents/Forced_Evictions_2019.pdf

While the above figures are alarming, they are a conservative estimate and present just a part of the real picture, as they only reflect cases known to HLRN. The total number of people evicted and displaced in India as well as those under risk of eviction, therefore, is likely to be much higher than documented.

Housing and Land Rights Network strongly condemns the continued occurrence of forced evictions and
demolition of homes of low-income and marginalized communities. HLRN callS on the state, at all levels, to:

Forced evictions not only violate human rights laws, but also reflect a continuing systematic dispossession of the poor. Persistent acts of home demolition and eviction directly contribute to a rise in homelessness, landlessness, displacement, impoverishment, and income inequality. Affected persons suffer multiple human rights violations as well as a considerable deterioration in their standard of living. This adversely impedes human development and national progress. The COVID-19 pandemic has reiterated the importance of adequate housing as a key determinant of health, safety, and life. Any state that is concerned about economic and social justice, and is serious about meeting its legal obligations must uphold the right to housing of its people, including addressing on an urgent basis, the crisis of forced evictions.

Tags:
Displaced / Elderly / Homeless / Forced evictions / Globalization, negative impacts / Health / Housing crisis / Housing rights / Advocacy
We use cookies on our website to give you the most relevant experience by remembering your preferences and repeat visits. By clicking “Accept All”, you consent to the use of ALL the cookies. However, you may visit "Cookie Settings" to provide a controlled consent.
Accept AllCookie Settings
Manage consent