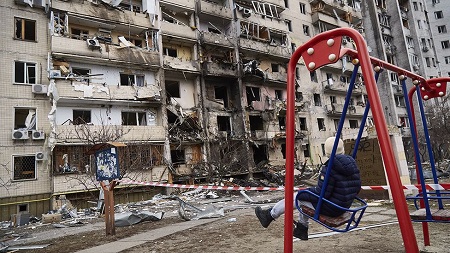 Habitat International Coalition (HIC) and its Housing and Land Rights Network (HLRN) condemn forced evictions as a gross violation of the human right to adequate housing in every context. In the case of Russian Federation forces’ invasion of the sovereign state of Ukraine, millions of civilians stand as a frontline of military assault. They are incurring untold costs, losses and damage to their homes, lives and livelihoods by grave breaches carried out by the invading power.

We have witnessed real-time reports of the indiscriminate use of weapons against residential buildings, villages, and communities across Ukraine. Such Russian attacks are prohibited in both international humanitarian law and always-applicable human rights norms. The Russian invasion has been using a range of tactics: multiple-launch rocket systems, tactical missiles, tank attacks and even widely banned cluster munitions.

Since the earliest phases of Russia’s campaign, advances have targeted civilian housing in and around the cities of Borodyanka, Chernihiv, Irpin, Kiev, Kharkiv, Kherson, Mariupol, Okhtyrka, Rivnopillya, Zhytomyr and others.[1] Many homes, civilian infrastructure including fuel depots, water and power stations are under attack or threat of imminent attack. Russian forces have targeted civilian infrastructure, including water sources and delivery systems, schools, hospitals, fuel depots and power stations, including nuclear power facilities.[2] Russian forces even have used live fire and heavy weapons against displaced persons, shelters and shelter seekers, flouting the most-fundamental humanitarian principles.[3] Russian forces have even openly attacked Ukrainian civilians queuing for bread.[4]

At the time of this writing, the displaced persons from these war crimes have amounted to at least 3 million, and the eventual number is estimated at ten million.[5] No military objectives can justify this dire humanitarian outcome.

Neighboring countries have absorbed waves of refugees across their borders. Meanwhile, border agents have revealed their selective compassion by embracing Ukrainian refugees, having rejected Black and brown refugees from similar war-torn situations and residents of Ukraine seeking refuge.[6] These scenes evoke memory of the openly inhuman treatment of West Asian refugees on the same borders, notably including as recently as two months ago.[7]

The deliberate targeting of civilian housing, vital infrastructure, and civilians in flight from military operations, as well as population transfer, including demographic manipulation, are prima facie war crimes, as well as crimes against humanity. The personnel carrying out these crimes bear individual responsibility for their crimes, as does the offending state bear obligations to both affected states and individual victims through reparations.[8]

We denounce these criminal practices by all parties, including analogous operations of NATO, its member states and their allies in Afghanistan, Iraq, Lebanon, Libya, Nicaragua, Palestine, Panama, Serbia, Syria, Yemen and elsewhere. These examples demonstrate the failure of the international relations of states and foreign policies as too often practiced as cross-border organized crime. The world system needs fundamental transformation, beginning with urgent obligatory respect for international law as developed.

HIC and HLRN tracks these multiple violations consistently as a subject of regular monitoring recorded in the HLRN Violation Database (VDB) and, in particular, in the form of a special World Habitat Day report released in October 2021 on housing and land violations in the context of ongoing Conflict, Occupation and War: Habitat-related human rights violations since the pandemic-era call for a global cease-fire. Unfortunately, that thematic treatment of global human rights violations could not have been more timely.

Photo: A child on a swing outside a residential building in Kyiv damaged by a missile. Source: Getty Images.

[5] Bart M. J. Szewczyk, “There Could Be 10 Million Ukrainians Fleeing Putin’s Bombs: Europe has opened its borders to the continent’s biggest exodus of refugees since 1945,” Foreign Policy (4 March 2022), https://foreignpolicy.com/2022/03/04/ukraine-russia-war-refugees-10-million/.

Tags:
Armed-ethnic conflict / Destruction of habitat / Extraterritorial obligations / Human rights / Advocacy / Communication and dissemination
We use cookies on our website to give you the most relevant experience by remembering your preferences and repeat visits. By clicking “Accept All”, you consent to the use of ALL the cookies. However, you may visit "Cookie Settings" to provide a controlled consent.
Accept AllCookie Settings
Manage consent