In
the year 2017, data collected by Housing
and Land Rights Network India (HLRN)
reveals that government authorities, at both the central and state levels,
demolished over 53,700 homes,
thereby forcefully evicting, at a
minimum, 260,000 (2.6 lakh) people[1]
across urban and rural India (see Annexure for details). These figures,
however, only reflect cases known to HLRN. The actual number of people
evicted/displaced across India in 2017, is therefore, likely to be much higher.

Major findings from HLRN’s study on
forced evictions in India in 2017 include the following:

2) Forced evictions were carried out for a range of reasons and
under various guises.

After
analysing the available data on 213
reported cases of forced eviction in the year 2017, HLRN has identified
four broad categories for which individuals and communities were forcibly
removed and displaced from their homes and habitats:

a) ‘City beautification’ projects, mega events, and
interventions aimed at creating ‘slum-free’ and ‘smart cities’ [46 per cent of
recorded evictions (99 of 213 cases) in 2017];

With the state demolishing over 53,700
houses in 2017, at least 147 homes were destroyed every day or six homes
destroyed every hour. This means about 30 persons were forcefully evicted every
hour by the Indian government and its agencies in 2017. 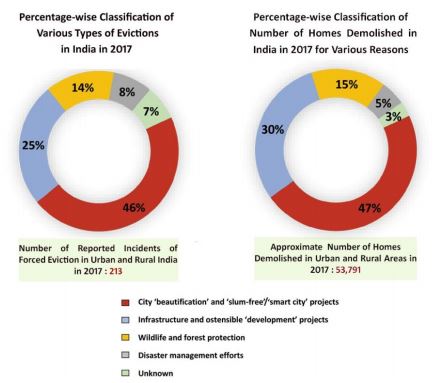 HLRN
finds that the highest percentage of
evictions (affecting over 122,000 people) were carried out for ‘slum[2]
clearance’ drives, ‘slum-free city’ schemes, ‘city beautification,’ and ‘smart
city’ projects. The notion that ‘beautification’ implies removing the poor
from cities reflects an alarming prejudice and discrimination against the
country’s most marginalized populations. In many cities, homes of the urban
poor continue to be considered as ‘illegal encroachments’ and are demolished
without any consideration that people have been living in those areas for
decades, sometimes 40–50 years, and possess documents such as election and
ration cards that validate their legality and proof of residence. In Navi
Mumbai, ‘slum clearance’ drives rendered over 3,300 families homeless between
January and October 2017. Between August and November 2017, different
government agencies in Delhi, including the South Delhi Municipal Corporation
and the Central Public Works Department forcefully
evicted over 1,500 homeless people from under flyovers in Delhi, under the
pretext of flyover ‘beautification.’

Mega events also resulted in evictions in 2017.
In order to ‘beautify’ areas for the Federation of International Football
Associations’ (FIFA) Under-17 World Cup tournament in October 2017, the
Government of West Bengal demolished 88 low-income homes and evicted 5,000
street vendors and 18,000 rickshaw-pullers in Kolkata and Salt Lake City,
resulting in loss of their income and livelihoods. The state government also
evicted 1,200 families for the Kolkata Book Fair.

Infrastructure and ostensible
‘development’ projects,
including road/highway expansion, canal widening, and metro projects displaced
over 77,000 people in 2017. While several evictions are justified by the state
for ‘public purpose,’ the term is ill-defined, even in law, and continues to be
misused. HLRN’s findings reveal the ironic situation of at least 6,900 homes
being destroyed for housing schemes in Hyderabad, Indore, and Vadodara.

Evictions
were also executed under the guise of ‘disaster
management.’ In response to a 2015 order (W.P. No. 39234/2015) of the
Madras High Court to take “expeditious steps for early removal of encroachments
by construction of alternative tenements,” the Government of Tamil Nadu evicted
over 4,784 families in Chennai between September and December 2017. The state,
however, has only targeted homes of the urban poor and left commercial
establishments along water bodies untouched.

Though
the Supreme Court of India and several state High Courts have, in numerous
judgments, upheld the right to housing/shelter as an inalienable component of
the fundamental right to life, in 2017, court orders and their interpretation
by state authorities were responsible for 17 per cent of the total evictions
recorded by HLRN.

3) In most of the reported eviction cases, state authorities did
not follow due process established by national and international standards.

In almost all cases known to HLRN,
authorities did not adhere to due process or human rights standards. In most
instances, affected communities were not provided any notice or adequate time
to remove their belongings from their homes. Central government authorities
carried out several evictions in Delhi during the winter, rendering families
homeless and vulnerable to the bitter cold and severe pollution. In Pul Mithai,
bulldozers reached the settlement at 4 a.m. and commenced demolition at 6 a.m.,
when people were still asleep in their homes. In Chennai, authorities evicted
families before and during school examinations and also during the rainy
season. Even though a Maharashtra government resolution prohibits evictions
during the monsoons, Baltu Bai Nagar in Navi Mumbai was demolished on 7 June
2017, leaving people out in the rain.

4) In the majority of cases, the state did not provide
resettlement; where provided, resettlement is largely inadequate. Forced
evictions are thus contributing to a rise in homelessness.

In numerous cases, the
displaced are not resettled on the false grounds that they are not ‘legal’
residents. The persistent discrimination against the country’s poor is further
perpetuated in state policy. Several state governments use the exclusionary
tool of ‘eligibility criteria’ to determine whether an evicted family should be
rehabilitated or not. Even when families have lived for many years at a site,
if they fail to meet the state’s documentation requirements or happen to be
omitted from state-conducted surveys, they are denied any form of relief or
resettlement, despite losing their homes, which are generally built
incrementally and with hard-earned savings. Where resettlement has been
provided for ‘eligible’ families, including by the Governments of Tamil Nadu,
Maharashtra, and Delhi, it is in inadequate sites located on the outskirts of
cities (for instance, Baprola in Delhi, and Perumbakkam, Navalur, and
Gudapakkam in Chennai). Reports highlight the deteriorating health of
people moved from along Mumbai’s Tansa pipeline to the polluted resettlement
site of Mahul.

The processes followed before,
during, and after evictions have resulted in the violation of multiple human rights of affected persons, including
their human rights to life, adequate housing, land, work/livelihood, health,
food, water, sanitation, education, security of the person and home,
information, participation, and freedom of movement and residence. The use of force
by police and local officials during evictions was reported in certain cases in
2017, including in Amchang Wildlife Sanctuary, Assam and Kathputli Colony,
Delhi where residents, activists, and a journalist were beaten up. In Chennai
and Delhi, deaths resulting from evictions have been reported. Children, women,
persons with disabilities, older persons, and those from Scheduled Castes and
Scheduled Tribes, are the worst affected by forced evictions and displacement.

The reported evictions and
demolitions contravene the Constitution of India, national laws, policies, and
schemes as well as international human rights treaties ratified by India. They
also go against the central government’s Housing for All–2022 scheme or Pradhan
Mantri Awas Yojana (PMAY). The slow rate of implementation coupled with the
destruction of housing of Economically Weaker Sections (EWS) and Low Income
Groups (LIG) makes a mockery of housing targets set by the state.

7) Using a conservative estimate, at least 600,000 people across
India are threatened with the risk of eviction and displacement for various
conservation and infrastructure projects, including dams, ports, and industrial
corridors.

HLRN strongly condemns all
acts of forced eviction, demolition of homes of the urban and rural poor,
displacement, and forced relocation taking place across India. Given the
severity and magnitude of the crisis and the fact that these incidents have
resulted in gross human rights violations, HLRN
proposes the following recommendations to the central and state governments:

1) Immediately recognize and
uphold the human right to adequate housing of all, which includes security
of tenure and the right to freedom from forced evictions. Adopt UN
standards for ‘adequate housing’ in all new housing, in situ (on site)
upgrading, and redevelopment projects.

3) Investigate incidents of
forced eviction and take punitive action against those found guilty of
violating the law and human rights.

4) Invest adequately in
low-cost housing, with a focus on social rental housing. Prioritize
participatory and human rights-based in situ upgrading of housing.

5) Ensure that evicted,
displaced, and homeless/landless families are considered for priority housing
under Pradhan Mantri Awas Yojana/Housing for All–2022.

6) Ensure that the free and
prior informed consent of all affected persons is taken before any
eviction/relocation/redevelopment/upgrading project is finalized.

7) Carry out a human
rights-based ‘eviction impact assessment,’ consistent with national and
international law, prior to the implementation of any project.

8) Incorporate a human rights
and social justice approach for the implementation of all schemes related to
housing, including PMAY, Smart Cities Mission, and the Atal Mission for
Rejuvenation and Urban Transformation, and prevent evictions and violations of
human rights.

9) Implement laws and court
judgments upholding the right to housing, and incorporate international
guidelines, including the UN Basic Principles and Guidelines on Development based
Evictions and Displacement, into national and state laws and policies. 10) Implement
recommendations of all UN human rights bodies, including those made by the UN
Special Rapporteur on Adequate Housing in her mission to India report,
particularly the recommendation for a moratorium on forced evictions and
demolitions of homes in India.

11) Implement recommendations
made to India during its third Universal Periodic Review, especially the
three recommendations related to providing adequate housing for all.

Annexure: Table
of Reported Incidents of Forced Eviction in Urban and Rural India in 2017

HLRN
Handbook on the United Nations Basic Principles and Guidelines on Development-based
Evictions and Displacement: http://hlrn.org.in/documents/Handbook_UN_Guidelines.pdf

[1] The total
number of persons affected has been calculated by multiplying the number of
homes demolished by the Census of India average household size of 4.8. However,
many demolished houses had more than one family and most of the affected
families have more than five persons. The
number of people affected is thus more likely to be in the range of
260,000–300,000.

[2] HLRN does not
support the use of the word ‘slum’ preferring the term ‘people’s settlements’
instead. In the terminology of the Indian government, ‘slum’ is a generic term
used to refer to settlements/homes of low-income groups.

Tags:
Housing rights / Land rights
We use cookies on our website to give you the most relevant experience by remembering your preferences and repeat visits. By clicking “Accept All”, you consent to the use of ALL the cookies. However, you may visit "Cookie Settings" to provide a controlled consent.
Accept AllCookie Settings
Manage consent