The winners of the 2022 Transformative Cities People’s Choice Award were announced at an international online event last Friday, 9 December. The 2021-2022 Transformative Cities People’s Award went to four initiatives for their work in the areas of water, energy, housing and food systems. Up to 16000 people from across the globe voted online to determine the winners, out of a selection of 12 international finalists, through a process that is one of the most participatory of any public city award in the world. 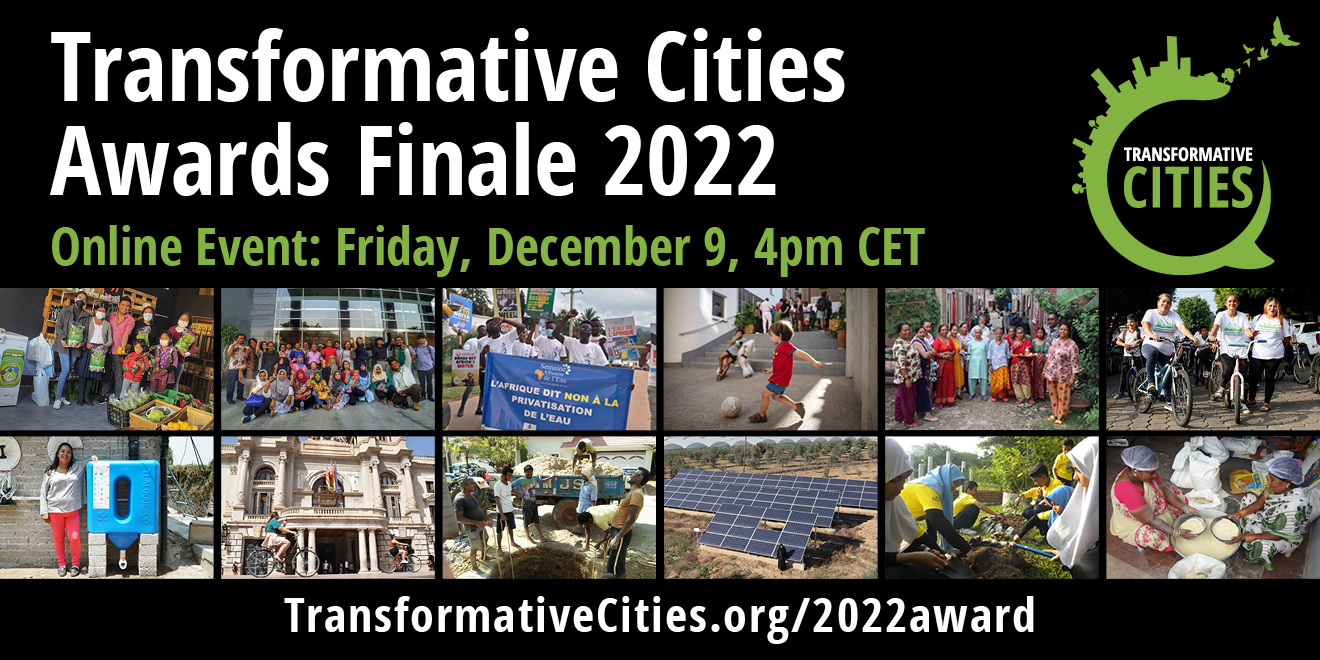 Transformative Cities is an opportunity for progressive local governments, municipalist coalitions, social movements and civil society organizations to popularize and share their experiences of building solutions to our planet’s systemic economic, social, political and ecological crises.

The winners of the Transformative Cities People’s Choice Award 2021-2022:

Water category: Million Wells for Bengaluru (India) aims to tackle the decrease of rainfall and to avoid flooding as the city gets paved over. A traditional but marginalized well-digging community, the Mannu Vaddars, are determined to help their community by sending rainwater to replenish the water table from which the city meets a large part of its water needs. At the same they revive their own livelihoods.

Shuba Ramachandran who represented Million Wells at the Finale stated “We want that the traditional well diggers see themselves (as) barefoot hydrologists that understand ground water. What we are doing in Bengaluru is being rolled out to other 10 pilot cities and then perhaps to other 500 cities. Winning this award puts us in a much better place to talk about the work that we do and see it work across the country.”

Food category: Sahaja Aharam – links urban consumers to rural producers in Hyderabad (India). It is dedicated to connecting and creating awareness amongst farmers and consumers through producer co-operatives, to ensure benefit to the farmers, to provide nutritional choices to consumers and to bring ecological benefits to the environment.

Housing category: Kirtipur Sambriddha Awas – relocation of road construction project affected slum dwellers (Nepal) – is the first planned urban relocation project that gave a successful alternative to 43 families who were forcefully evicted from their homes. The ‘Urban Community Support Fund’ proved to be the successful approach in sustainability of the project.

Lajana Manandha, who represented Kirtipur Sambriddha Awas at the finale shared “We are very happy to receive this award. [A recognition to] all the struggle and the effort to provide a better housing solution and to say no to forced eviction.”

Energy category: No Bicycle, No Planet is a campaign in Guazapa (El Salvador) intended to reduce the impacts of climate change by empowering women to fix bicycles, by educating young people about road safety, by opening new cycle routes or by promoting bicycle ordinances at the governmental level.

Mario Jesus Lopez Arriola representing No Bicycle, No Planet at the finale “Bicycles are magical. It helps you to move around, it is free, it does not pollute and according to the UN it can reduce greenhouse emissions and reduce climate change. We are working with a collective of cycling women and with the municipality showing how young people can help to reduce climate change and to help people who are most vulnerable to move around. We are promoting the bicycle with over 25 schools in 10 municipalities, so we are doing a great process to increase awareness. ”

An honorable mention was given to PENGON (Friends of the Earth Palestine) for the initiative 100% renewable energy for Gaza (Palestine). This initiative has been selected as a finalist for the Transformative Cities Award for three consecutive years. Despite not being awarded by the popular vote, they set an example about how even in the face of war and struggle, their resilience and determination do not decrease. On the contrary, it grows by the day.

Abeer Butmeh representing PENGON at the finale;“This recognition brings more light to Gaza, we will continue working (to) achieve clean energy. I am very proud we could pursue significant solutions to the energy scarcity in Gaza and eliminate darkness by bringing clean energy to the communities´ hands with special focus on women and empowering women as sustainable energy leaders. This is a great opportunity for us to build a global network to work together hand in hand and build a sustainable environment and a sustainable future.”

The organisers of the Transformative Cities Award shared at the finale that this initiative emerged from an analytical perspective that recognizes that the economic and political relevance of cities is growing in the current historical context, which is defined by the tensions arising from the exhaustion of the latest phase of capitalism: neoliberal globalisation. By focusing on cities, we can find multiple economic and political practices that contribute to a global transformation towards a post-capitalist future. The Transformative Cities People´s Choice Award and the Atlas of Utopias are intended as a process and a tool to give greater visibility and resources to local practices that preconfigure post-capitalism, thus facilitating its spread and prosperity.

Following this public award, the Transformative Cities initiative will continue to support the many transformative cities by giving them more visibility and by facilitating processes of exchange and collective learning. One example of this is the International Diploma on Transformative Local Governments in collaboration with the University of Recoleta.

Tags:
Collectivization / Accompanying social processes
We use cookies on our website to give you the most relevant experience by remembering your preferences and repeat visits. By clicking “Accept All”, you consent to the use of ALL the cookies. However, you may visit "Cookie Settings" to provide a controlled consent.
Accept AllCookie Settings
Manage consent