On 25 March it was announced that S’bu Zikode would be awarded the 2021 Per Anger prize. Per Anger was a courageous anti-fascist and the prize is awarded by the Swedish government “for humanitarian work and initiatives in the name of democracy”.

Human rights activist S’bu Innocent work centres on the right to home, land, and survival for the most impoverished inhabitants of South Africa’s shack settlements. 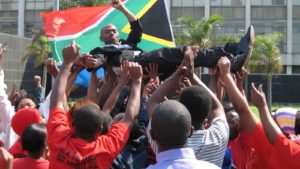 The HIC family is very pleased with this recognition, as our Coalition has always supported the work of Abahlali baseMjondolo (AbM), a democratic organisation, with tens of thousands of members, that is doing vital and courageous work in the interests of social justice. This grassroots movement of poor shack dwellers in South Africa advocates for the rights of people living in shacks including access to decent housing, services and education.

The ceremony, and the speech by S’bu Zikode and a performance by Sisanda Nilsson, can be watched here:

We reject fake freedom, celebrate a global prize and 15 years of struggle

On Saturday 24 April, Sunday 25 April and Tuesday 27 April our movement will be mourning the promise of freedom that was lost in 1994. Unfreedom Day events will be held in different provinces. We will also be celebrating 15 years of struggle, and the growth of our movement despite serious repression and the award of the Per Anger Prize to the president of our movement S’bu Zikode.

On Saturday our members will gather in Tembisa in Gauteng Province. On Sunday we will gather in the Thuli Ndlovu Hall at the eKhenana Land Occupation. The event on Tuesday will be held in Mpumalanga province.

Over the years people who live in shacks have been ignored, undermined and repressed by those in power. When you are living in shacks you are taken as someone who cannot think for yourself. We are also considered to be thugs who must governed with everyday violence, and causally slandered, tortured and even murdered when we rebel. We have rejected this and demanded that we must be treated with dignity, a dignity that is offered to all.

This fight for our dignity and recognition as human beings has made us enemies of the state. Many of our leaders and members have faced attacks from state organs in the form of the police and the Anti Land Invasion Unit. A number of our leaders have been murdered by the izinkabi.

Across the country shack dwellers continue to be denied basic services. As a result children continue die from diarrhoea and we continue to die in shack fires.

We have become a bank of voters for greedy politicians who have hijacked the people’s struggle to enrich themselves and their families. We are just kept alive with grants, but are not expected to want more than to just be kept alive.

We want full and rich lives. We want futures of our children in which they can reach their full potential. We want a world open to all.

Land, wealth and power must be fairly shared.

We have been failed by those whom we once entrusted with our votes to serve us. Instead of serving the people the ANC leaders focussed on making themselves and their families rich. Now they are embroiled in factional battles. These are battles between competing elites, some who became rich from making deals with capital and others who become rich from looting the state.

The question is what is important? The people of this country who are living in terrible conditions in shacks settlements and rural areas or the factions within the party? Our government chooses the latter because they do not think that we are important. They only pretend to see us as important during elections. It is urgent that the poor and the working class in general refuse to accept the authority of those oppress us. We need to come together and refuse to vote for poverty, corruption, capitalism and repression.

Today the community of the Marikana Occupation in Cato Crest are destitute and have no place to go. Their homes have been gutted by another fire. Yet there have not been any government officials from the provincial or local government who have attended to the matter. If you are a poor black person you are truly on your own. Our own black government failed us. It is therefore essential that we as the oppressed organise ourselves to build our own power and democratise society from below.

No one can deny that we are not free. We will continue to organise and build our movement, and to work with all progressive organisations, to build a democratic socialist society in which the dignity all of respected.

Our dignity is not negotiable.

Tags:
Housing rights / Human rights / Informal settlements / Accompanying social processes
We use cookies on our website to give you the most relevant experience by remembering your preferences and repeat visits. By clicking “Accept All”, you consent to the use of ALL the cookies. However, you may visit "Cookie Settings" to provide a controlled consent.
Accept AllCookie Settings
Manage consent