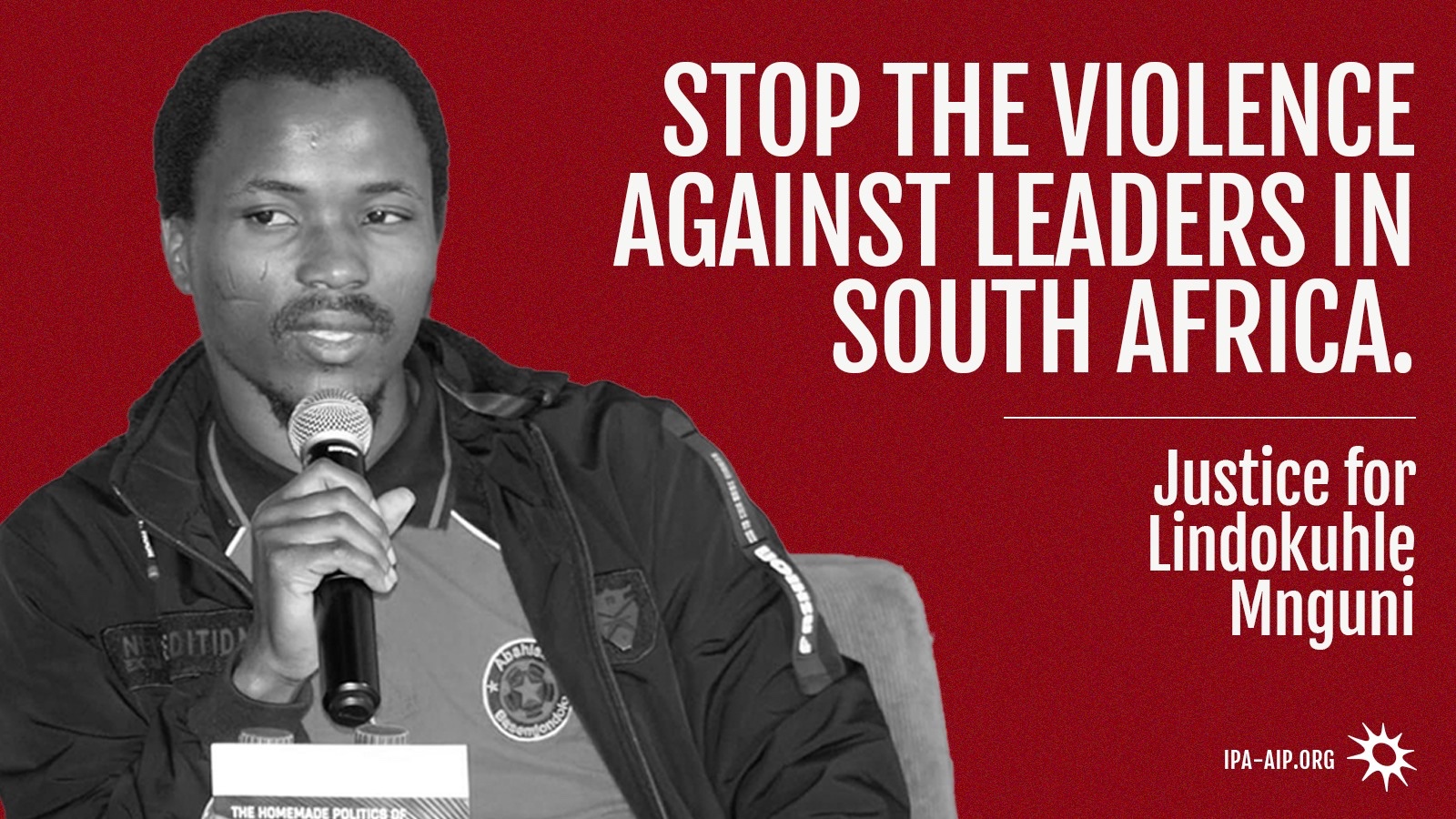 HIC stands against the persecution and assassination of Abahlali baseMjondolo members

Lindokuhle Mnguni, the chairperson of the eKhenana Commune and the Youth League of Abahlali baseMjondolo (AbM), shack dwellers’ movement in South Africa, was assassinated at the Commune on 20 August, according to AbM press release.

Once again HIC stands in deep solidarity with the Abahlali BaseMjondolo (AbM) movement, with the family of Lindokuhle Mnguni and with all those grieving the murder of this South African land rights defender. Our thoughts and solidarity go also to his partner who was critically injured in the attack.

Lindokuhle Mnguni, 28, was shot dead in his home during the early hours of Saturday 20 August. In its statement, Abahlali described him as “a fearless leader” who always “stood for his community.

Our coalition strongly condemns the continued killing of AbM members and activists. This is the third AbM leader martyred since March 2022. On 8 March 2022 Ayanda Ngila, a young leader in the Commune who had twice been jailed on ridiculous charges, was assassinated. Later in May, Nokuthula Mabaso, a powerful leader in the eKhenana Commune and the Women’s League, was assassinated in eKhenana.

International solidarity is vital to AbM members safety and to enable this movement to continue their vital and courageous work in the interests of social justice. This grassroots movement of poor shack dwellers in South Africa advocates for the rights of people living in shacks including access to decent housing, services and education.

The repression of this movement must be stopped, a repression that has continued for years. In 2018, HIC denounced the threats against AbM during the High-Level Political Forum in New York, with a communiqué and displaying this video.

Housing and Land Rights Network-Habitat International Coalition (HIC-HLRN), with its member organizations across the African continent, the Americas, the Middle East, Europe and Asia, stands in solidarity with those grieving the murder of South African land rights defenders Ayanda Ngila, who was shot and killed in broad daylight on Tuesday, 8 March, and Nokuthula Mabaso, was shockingly assassinated by gunshot in front of her children on Thursday, 6 May, and Lindokuhle Mnguni, who was killed on Saturday, 20 August, while in hiding after witnessing the murder of Ngila. HIC-HLRN calls for urgent action in the independent investigation of their deaths and the prosecution of the perpetrators. We also denounce the ongoing escalation of violence and arrests perpetrated against residents of informal settlements, including the killing by local police of eNkanini Occupation resident Siyabonga Manqele and urge an immediate halt to police-led violence.

Ngila, Mabaso and Mnguni were leaders of Abahlali baseMjondolo in the eKhenana Commune, a portion of land that is home to 109 families in the informal settlement of Cato Manor, near Durban. Members of the local ANC party are alleged to be responsible for all three killings. Ngila, Mabaso and Mnguni are believed to be the 19th, 20th and 21st activists murdered since the establishment of the Abahlali baseMjondolo shack dwellers’ movement in 2005, and the sixth and seventh members of eKhenana to be killed since the Commune’s establishment in 2018.

According to HLRN’s Violation Database, more than 94,000 people have been forcibly evicted in South Africa since the ANC came to power in 1994.

We call on the South African authorities to ensure that the murders of Ayanda Ngila, Nokuthula Mabaso and Lindokuhle Mnguni are immediately and thoroughly independently investigated and that all those responsible for these crimes are held responsible and duly prosecuted. In particular, we call on the President of South Africa Cyril Ramaphosa, the Minister of Police and the Head of the National Prosecuting Authority to ensure justice and peace for the people of eKhenana and members of Abahlali baseMjondolo in other settlements.

We call for an immediate halt to ongoing acts of violence and intimidation toward the community of eKhenana and all informal settlements, and for the broad protection of all land rights defenders in South Africa, in line with the UN General Assembly Declaration on Human Rights Defenders.

We call on the South African Human Rights Commission and the Minister of Police to urgently investigate allegations of the involvement of police and various officials in intimidation, violence, bias and other forms of misconduct toward members of Abahlali baseMjondolo.

Tags:
Slum dwellers / Housing and land rights / Housing rights / Land rights / Accompanying social processes / Urgent actions
We use cookies on our website to give you the most relevant experience by remembering your preferences and repeat visits. By clicking “Accept All”, you consent to the use of ALL the cookies. However, you may visit "Cookie Settings" to provide a controlled consent.
Accept AllCookie Settings
Manage consent