What is it? / Key Actors / Why / What is the purpose? / Download the proposal /  How can I support the dissemination? 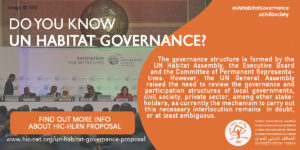 The Voluntary Working Group on the Institutional Arrangement, of which the Habitat International Coalition and the Housing and Land Rights Network (HIC-HLRN) are Members, developed a proposal for a Institutional Mechanism for Stakeholder Engagement in the New UN Habitat Governance to bring together representatives of the various stakeholder groups with the UN-Habitat Executive Board (EB) at least once a year. This would be reflected in the decisions of the EB, as well as in the UN-Habitat Assembly, and would lead to continued cooperation with stakeholders at all levels in the implementation of the New Urban Agenda.

UN-Habitat, the United Nations Programme for Human Settlements, whose mission is to promote socially and environmentally sustainable human settlements development and the achievement of adequate shelter for all (unhabitat.org).

Since 1978, this agency has been addressing the problems of urban growth and now has offices in over 90 countries. It has four objectives: reduced spatial inequality and poverty; enhanced shared prosperity; strength climate action and improved urban environment; effective urban crises prevention and response

Currently, the governance structure is formed by the UN Habitat Assembly, the Executive Board and the Committee of Permanent Representatives. The Assembly is composed of 193 UN Member States that meet every four years at the UN-Habitat headquarters in Nairobi, Kenya; the Executive Board is composed of 36 UN Member States selected by the Assembly and meets three times a year; while the Committee meets every two years.

The first meeting of the three parties was held in May 2019, after the UN General Assembly dissolved the Governing Council and became the UN Habitat Assembly in December 2018.

As part of the approval of the New Urban Agenda, the UN General Assembly resolved that UN Habitat revise its governance and stakeholder-engagement structures, as at present the mechanism for carrying out this necessary dialogue remains ambiguous.

The proposal makes a historical review of the trends of civil participation in different United Nations organizations, whose origin dates back to the first United Nations Conference on Human Settlements (Vancouver, 1976) and in the process of negotiation towards the Habitat Agenda, with a Plan of Action that explicitly recognized the role of local governments and allied civil society groups and others in its implementation. The Habitat II process (1996) observed an unprecedented “right of participation” of local governments and non-governmental organizations in its negotiations, but also highlighted their role as key parties in the implementation of the Agenda. However, this experience was not institutionalized and has not yet been established at the political level within UN-Habitat.

What is the purpose?

UN-Habitat accompanies, advises and promotes various urban development programmes around the world. For example, in Mexico it collaborates with the federal government to implement the country’s main strategic projects such as the Tren Maya (Mayan Train), the corredor Transístmico (Transisthmian corridor) and the Central American Development Plan, where the UN is called upon to support four countries in the area of migration. In addition to implementing the Índice de Prosperidad Urbana (Urban Prosperity Index) in 130 cities in the country; and the support program “Infonavit at the head of Agenda 2030: housing at the heart of the Sustainable Development Goals”.

A more inclusive process and working relationship would enable stakeholders to resume their involvement on a stronger basis that builds trust and mutual respect. Today, it seems natural for United Nations organizations and their respective governing bodies to listen to and take into account the voices of stakeholders, such as civil society in its broadest sense, local governments and the private sector. Bringing these stakeholders together would also improve mutual understanding and enhace partnerships

The report is available here

The full report is available here: “Toward an Institutional Mechanism for Stakeholder Engagement in the New UN Habitat Governance”

The Executive Summary is available in English, Spanish and French

How can I support the Campaign?

We want to explain why it is important for UN-Habitat to review its governance and stakeholder participation structures by ensuring greater involvement of civil society, local governments and the private sector.